Mrs. Mishey Edwards of O’Fallon, Mo., passed away at her home Monday evening at five o’clock following a heart attack. Mrs. Edwards who was 76 years old and a resident of O’Fallon for a number of years is survived by one son. Donald of Kansas City, Mo. Five grandchildren, Donald Jr. and Mrs Anna Jean William of Kansas City, Mrs. Mary

Stephenson of St. Charles, Mrs. Betty Keys of St. Louis and Leo Hart of O’Fallon, Mo., seven great grand children and a number of other relatives and friends. The body will be in state at the Craven Chapel M.E. Church in O’Fallon, Mo. from Friday evening until 2 pm. Saturday afternoon when funeral services will be conducted. Burial will be in the church cemetery. Daily Cosmos Monitor October 3, 1957

Mishey  passed away on September 30, 1957. She was born on November 10, 1881, the daughter of Charles “Freeman” Letcher and Frances Rafferty. She was preceded by her son Gilbert Hubbard, born July 7, 1898 who died April 10, 1919; her son by Arthur Edwards, Rolf Chester born the 5th of May and died the 12th of June, 1912; daughter Dorothy Edwards born February 22, 1904 and died February 2, 1952; and her husband of nearly fifty years, Arthur Edwards, also known as Arthur Vardeman who passed away three months before. They are all buried at Sage Chapel Cemetery.

On August 20th, in 1881, Mahala (Keithly) and her husband Jasper Costlio had transferred to the Trustees of an African Methodist Episcopal Church for the use by the  Conference, one acre of land, which became known as Sage Chapel Cemetery. This was done so that the former slaves of  Samuel Keithly could continue to be buried in this cemetery. That same deed conveyed a one-half acre parcel on Sonderen Street to be used for a church known as Sage’s Chapel. The members of Cravens Methodist, and Wishwell Baptist, also located on Sonderen Street, also used this cemetery to bury their families. None of these churches or their records exist anymore. Sage Chapel Cemetery is a former African American community cemetery that is  maintained by the City of O’Fallon, Missouri, located at 8500 Veterans Memorial Parkway.  It has 117 documented burials of which only 37 have headstones, of these we know that 17 were born enslaved. (2018) May they rest in peace “As long as a name can be spoken, that person shall not be forgotten.” 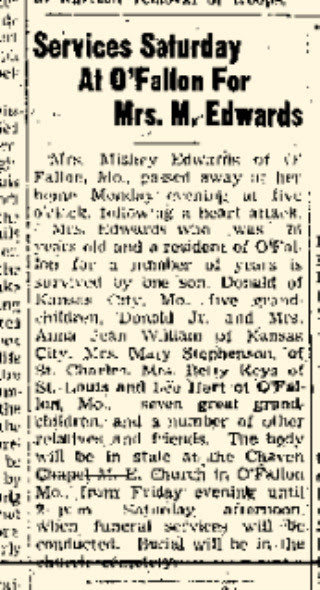