A cemetery is the collective memory of a community. On August 20th, in 1881, Mahala (Keithly) and her husband Jasper Costlio had transferred to the Trustees of an African Methodist Episcopal Church for the use by the Conference, one acre of land, 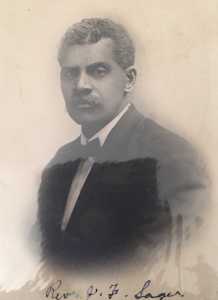 which became known as Sage Chapel Cemetery. This was done so that the former slaves of Samuel Keithly could continue to bury here. That same deed conveyed a one-half acre parcel on Sonderen Street to be used for a church known as Sage’s Chapel, as preacher Jefferson Franklin Sage was a traveling minister with the A.M.E. Conference. The members of Cravens Methodist, and Wishwell Baptist, also located on Sonderen Street, also used this cemetery to bury their families. None of these churches or their records exist anymore.

Samuel Keithly had come to Missouri in the early 1800s, from Kentucky, bringing several slaves with him. John Rafferty, his sisters, Frances, Ludie, Elsie and Lizzie, had been born in Kentucky, and were brought to a community only slightly different from what they had known before. Missouri had entered the Union on August 10, 1821 after a lengthy battle over the issue of slavery. This would become a larger issue when thousands of  German immigrants like the Krekel family would arrive in 1832. In 1855, German born Arnold Krekel had purchased 320 acres that adjoined Keithly’s and set up his younger brother  Nicholas Krekel as station agent for the railroad, naming it after his friend John O’Fallon. German abolitionist, Arnold Krekel would be the

President of the Missouri Constitutional Convention that signed the Proclamation for Emancipation of Missouri’s slaves on January 11, 1865 in Jefferson City. This was Emancipation day for John Rafferty, Priscilla Ball, Winston Davis, Martha Burrell, Mary Edwards, Maria Brady, George Sanders, Lucy White and all the other former slaves buried at Sage Chapel Cemetery. This was also the same  community that these people would continue to make their home “after freedom”.

After the Civil War, the community between between the railroad and the former burying ground on Keithly’s farm grew. Emancipation meant freedom, but it did not mean equal. As education of blacks had always been prohibited, having a school was very important, but it would

not be equal. A school for just the black children, was housed in a small building that sits on the northwest corner of Elm and today’s Sonderen. Next to that was Cravens Methodist Church, named for a Mr. Craven who had donated the land. This was a Northern Methodist church that had begun in 1871, and would become the only black church for the next ten years. Across the street (Sonderen) was Willis Thornhills place, a social

gathering place for the community. This is where the Colored Odd-Fellows Lodge met regularly.  (This is the Thornhill-Obrecht house at the northeast corner of Elm and Sonderen and listed on O’Fallon’s Historic Register). As you proceeded south along this roadway, you went downhill to the creek,  a branch of the Peruque Creek, where later in 1891, the Baptists from Hopewell Baptist Church (south of Wentzville on Hwy. N) had planted a new church naming it Wishwell Baptist Church.  Just south of Wishwell you

found the home of Liberty Abington (buried in Sage Chapel Cemetery) who had purchased his 1/4 acre of land from the Trustees of Sage Chapel Church, which was sold off from the 1/2 acre they had received from Mahala and Jacob Costlio in 1881. This was apparently done to enable the Trustees of Sage Chapel to pay off their $150 Deed of Trust debt with the Castlio family. There one began to climb a steep hill. The road was dirt. And along it lived the families of Sage…Edwards, Thomas, Abington, Luckett, White and many others. The road led directly to Sage Chapel Cemetery on top of the hill. Near here was where  the churches gathered each summer for their rally, bringing friends from as far as St. Louis to Mexico Missouri. It is said that the blacks loved to worship in this field of Sage.

After Samuel Keithly’s death, his property which was directly east of O’Fallon, was eventually owned by George Sonderen, whose name had been given to the road that went from the railroad to St. Peters. Sometimes it was referred to as St. Peters Road, and in the early 1900s, it became known  as “The Hill” although the U.S. Census taker of the 1920s and 1930s, added an additional derogatory slang word. This shows how the 20th Century had brought segregation even to the small town of O’Fallon. The Great Depression would affect everyone, both black and white alike. But following World War II, even small towns would begin to grow. And as the white population grew, the black population left, seeking jobs and better opportunities. America was changing, and it had grown impossible for blacks to find any chance for decent jobs or homes, whether in a large city or small town. The larger the city the greater the chances.

By the 1960s, the African American community of O’Fallon had dwindled to a few families. It was the family of the beloved Bill “Willie” Hayden who still remained in O’Fallon, and took care of Sage Chapel Cemetery. He and his children cut the grass, pulled

the weeds and maintained it as long as they could. In 2012, a friend of the family and long time resident of O’Fallon, Jim Frain, joined Phyllis Hayden making sure that the cemetery was preserved. In 2017 countless other volunteers from the community joined them in their efforts. Two local historians Dorris Keeven-Franke and Justin Watkins are seeking to have the cemetery placed on the National Register of Historic Places. This website is a result of the research done for the nomination. Today (2018) Sage Chapel Cemetery is a former African American community cemetery that is maintained by the City of O’Fallon, Missouri, located at 8500 Veterans Memorial Parkway. It has 117 documented burials of which only 37 have headstones, of these we know that 17 were born enslaved. The story of Sage Chapel Cemetery belongs to the entire community. It tells of the struggles of these African-Americans, and seeks to give a greater  understanding of their lives. We welcome others to join the community.